Daphne Maxwell Reid: Killing it at 70 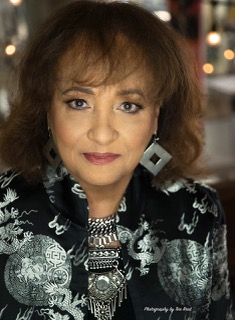 Fans of the popular ‘90s sitcom The Fresh Prince of Bel-Air know Daphne Maxwell Reid as Will Smith’s “Aunt Viv.” (Reid replaced actress Janet Hubert in the role for the final three of the six seasons of the NBC series.)

Others remember Reid as the first woman of color to appear on the cover of Glamour magazine nearly 50 years ago, in 1969.

What many don’t know is that Maxwell Reid grew up in a housing project in New York City. In college, when the “n-word” was unexpectedly tossed at her, she didn’t get enraged but used the moment to educate the ignorant.

CoveyClub spoke with Maxwell Reid because she has reinvented herself as a designer, author, and now an education activist.

TheCovey: How did the opportunity to play the second “Aunt Viv” come about?
Daphne Maxwell Reid: I was asked to audition for Fresh Prince in the very beginning. They said, “It’s a half-hour sitcom with a young rapper…” and I said, “No, thank you.” Three years later, I got a call asking, again, if I’d like to audition. I [knew I’d] missed an opportunity, so the second time I [got right on a plane to California]. [Today we’re] on the third generation of Fresh Prince watchers — a real treat in my life. I had no idea how popular that show [would continue] to be. We’ve all stayed in touch with each other. TheCovey: You’ve accomplished so much — tackled so much — and you’ve had so many transitions. Are these reinventions hard? Did you ever fear failure?
Daphne Maxwell Reid: Tim Reid [actor, writer, producer, and husband of more than 30 years] is my biggest supporter. [He’s also] the guy who sticks his foot in my butt when I slow down! He’s pushed, encouraged, and challenged me [because] I need [to have] a new adventure every decade! I think all people are filled with doubt until they step forward. I spend time wondering if I [can] succeed, but it’s only through doing that you reassure yourself that, “yes, you can!” You move forward and see where it goes, and you modify as you move along. I set certain parameters for what I wanted out of each endeavor.

[My feeling is:] if you woke up, you can do something. Don’t negate or talk away your God-given gifts. It’s imperative that you not waste them!

TheCovey: Your latest reinventions include a fashion line, photography books, and a new cookbook?
Daphne Maxwell Reid: I’ve been sewing since I was nine years old. Tim always wanted me to create a multimillion-dollar fashion business, and that wasn’t a sacrifice I wanted to make. I actually made the clothes I wore on the ‘80s TV show Simon & Simon.

Now, as host of PBS’s Virginia Currents, I wear Chinese silk brocades, jackets I made myself. In 2017, Tim convinced me to present my Daphne Style collection at New York Fashion Week. I have 50 different fabrics to choose from and I will create one jacket in the fabric of your choice. You can select one of two style choices: mandarin collar or shawl collar. Each jacket is custom made to order.

[My interest in photography came from] my daddy, Green Maxwell, who gave me a brand new Brownie (a basic, inexpensive camera) for my ninth birthday. Doors pique my curiosity [because I see them as a] metaphor for life and opportunity, adventure and curiosity. My favorite door is the red one I photographed in Italy that’s on the cover of my first book.

[Cooking came from] my mom, a wonderful cook, and a homemaker. I shared some of her recipes in my cookbook, Grace + Soul & Mother Wit, really a memoir of what food is to me. There are pictures of my memories of growing up in New York and each recipe contains a story [about what] it means to me. There are even some fun little jokes. I have a recipe called “King Tim’s King Crab Legs,” which is made with beer. When you follow Tim’s recipe, you drink the beer as you [cook]. TheCovey: You grew up in a housing project near Manhattan’s Lincoln Center. Who pushed you, academically and socially, to succeed?
Daphne Maxwell Reid: It wasn’t really a ‘push.’ I was told, “you are gifted, you are special. Use it, don’t waste it, move forward.” My older brother was the first to go to college. There were lots of kids in the projects who went to college. The projects back then are not what they are now. It was a vibrant and very caring, supportive community. Yes, there were drugs and things, but my brothers and I learned that doesn’t get you anywhere. We were expected to do the best that we could and heard statements like, “If you’re going to be a garbage collector, be the best garbage collector, and do it with purpose.”

TheCovey: You went to Northwestern University in the late ‘60s after high school at New York’s renowned Bronx Science. When you arrived in Evanston, there was a lot of racial division. What happened?
Daphne Maxwell Reid: I wasn’t used to racial division in New York. But in Evanston there was a stringent separation of races; I was aghast. [Some of] my classmates just didn’t like black people. They’d never had to interface with them and didn’t want to start now. My assigned [freshman] roommate said [to me], “I’m not rooming with any [n-word.]”

I wasn’t mad; I just thought she was ignorant and insane and asked her, “Where are the [n-words]’s? I don’t see any.” There were people who said to me because I was black, “I didn’t expect you to be like this; you don’t have a chip on your shoulder,” and I thought, “Why would I have a chip on my shoulder?” [So I told them,] “I’m here [to educate] you— what would you like to know?”

It never crossed my mind [to transfer]. You don’t run from a situation like that. [Never] let someone else set your agenda or limit your expectations. I found my way through [that] foreign land and had a wonderful time. I met my (first) husband [there]. I would never change a thing about my college experience because these experiences made me the strong woman I am now.

[In fact,] sophomore year, I became Northwestern’s first black Homecoming Queen. [The administration wasn’t] ready for that. I don’t think [the students] intended to elect me. It was me, and four white sorority girls running. I later heard that some grad students marched to oppose my nomination.

After I won Homecoming Queen, I was informed that my win wasn’t going to be in the yearbook because it wasn’t important. That was offensive to me. History is made by the notes that are taken, and whoever writes the history is the one who shapes what the future will be. Today, there’s a vibrant Black Alumni Organization at Northwestern. They presented me with an award about 15 years ago — probably because I was on TV— and invited me to come and speak. I explained [how I had won Homecoming Queen] and they had no idea. I said, “How would you know? They didn’t write it down.”

TheCovey: You were the first black woman on the cover of Glamour. You’re a trailblazer.
Daphne Maxwell Reid: This is how I see it: I happened to be the first at so many things because I happened to be there. I didn’t cause them to happen. [The] people who came before me, my mother included, planted seeds [that] provided me the opportunity to [pass the] “finish line.”

My freshman year of college, I was profiled in a “Real Girls” issue of Seventeen because a junior high school teacher passed along my name to be selected. Eileen Ford saw my picture in Seventeen and asked me to join her agency. They’d call me to New York to do a shoot and then I’d go back to college. I was 19, almost 20 when they signed me to the Ford Agency. Daphne on the cover of Glamour Magazine

TheCovey: You do speaking engagements that stress the importance of education for students of color. How did you come to choose youth education as a priority?
Daphne Maxwell Reid: In the 1980s, Tim and I started a scholarship fundraiser for students who needed help at his alma mater, Norfolk State University. We raised more than a million dollars over a 20-year span and assisted over 100 students by providing them with financial aid. The recipient’s only requirement was [that they promise to do the] same for the next generation of students.

After giving commencement speeches at many historically black colleges, and receiving honorary degrees, the commitment to continue helping students was firmly implanted in my psyche. I tell students who think college isn’t an option that your environment does not define you. If you’re from the projects, you don’t have to stay there. Inspiration can be found from so many sources and I always try to point students to someone who can be inspiring to them. It’s easy to make excuses, but it doesn’t mean … you can’t try.